3- Months in to Airbnb Plus: My Take To-Date

In September of last year, several Nashville hosts got the long-awaited email announcing that Airbnb Plus was coming to town. At first, the invite seemed like a badge of honor. Hosts were buzzing and excited.

Quickly, the excitement turned into skepticism. Stories began surfacing that included things like: “Airbnb Plus photographer was a no-show for my appointment”; “you should see the laundry list of fixes they want me to make”; “Plus guests have higher expectations and leave lower reviews”; “my photos are awful”; “don’t do it- they hijack your listing”; and the list goes on.

I felt like much of the feedback were simple misunderstandings that I often see in general when it comes to Airbnb. I did some of my own outreach to others who were already on the Airbnb Plus program in other cities. That included Darik Eaton, owner of Seattle Oasis Vacation Rentals. I can always trust Darik to give me the real scoop and he convinced me it was worth a go.

My first Airbnb Plus listing went live on December 7, 2018. That means earlier this month, I celebrated my 3-month Plus-iversary. This first listing happened to be a great test case because I own 2 other studios in the same building that were not invited to Airbnb Plus (despite offering the same exact amenities and having similar design qualities).

Important Notes Before Reviewing the Data

·      The occupancy & rates are JUST Airbnb numbers. They do not reflect my total occupancy rates for these properties as I did have bookings from other sources like HomeAway/ VRBO/ my own website.

·      January and February are the slowest months in Nashville for me so there is natural uptick month over month moving into the busy season.

·      Standard Airbnb Listing 1 and 2 bookings were predominantly only weekend bookings the first 2 months. Since Average Nightly Rate is an aggregate of all nights NOT broken out by weekend versus weekday, those numbers are a bit skewed. The February and March To-Date data are more accurate representations of rate comparison for this reason.

For comparison, here are the links to all listings:

As with anything new, this is still something I want to monitor closely. However, based on these early results, here are my initial observations on Airbnb Plus:

·      Increased Visibility: You certainly cannot argue that the Airbnb Plus listing is getting much more visibility when it comes to number of page views. Between the advertising and search result placement, this definitely does not come as a surprise.

·      Increased Airbnb Rates & Occupancy: In every month, the Airbnb occupancy and rates are higher with the Airbnb Plus listing compared to the standard listings- and those numbers continue to rise. I am not sure how I feel about this yet. The strategy for my own rentals is diversification of booking sources. As you can see for March to-date, I am at a 100% occupancy with strictly Airbnb. That certainly doesn’t lend itself to having availability for other booking sources. However, the rate increase is certainly nice so for now, anyway I am okay with it.

·      Better Photos (depending on your photographer- and opinion): This one is debatable for some, but I personally like the style of the Airbnb Plus photos. They’re shot in HDR with less of a “real estate listing photo” look and more of an “Architectural Digest” look. I think my photos turned out lovely and were an improvement.

·      Expect More Guest Questions: Using the description area and my own photo order, I was able to explain the important aspects of the space. While I certainly still got the occasional question about the space previously, I get it a lot more now. The two questions I get most “I see you sleep 4 people, is there a second bedroom?” and “do you have a picture of the pool?” You cannot add your own photos for Airbnb Plus. In my case, they won’t allow ones of the sofa bed pulled out and the pool was closed during winter so no photos were taken. You also cannot send a photo in Airbnb messenger until after a guest books. So… I now have to direct people to my other Airbnb listings to see those pictures. Luckily, I can do that because they’re in the same building and a similar layout. Others may not be so fortunate.

·      Communication is Difficult with Airbnb Plus team: I have one other listing (in a different Nashville location) live on Airbnb Plus and another that was actually the first to go through the interview process on September 30th. I received my “fixes” (had to show a pic of my closet and guest book) back in December and the status still says they’re editing photos. I’ve emailed them to follow up a few times and it takes about 2-3 weeks for them to reply. Their reply? We’re still reviewing the photos. *sigh* Getting any information that is not part of the email confirming your appointment is incredibly difficult as well.

·      Be Wary of the Increase Claims: My original email stated a significant revenue increase. Every home has a max value and if you’re already at the top of the market, it’s pretty hard to increase that dramatically. Their website now claims 7x more listing views and 70% more nights booked. The 2 listings I have live on Airbnb Plus were already at an 88% and 89% occupancy last year. I am not sure how they’re calculating the base but 70% more nights booked would be impossible for me as we all max out at 100% occupancy. While I am certainly happy with the increase in views and occupancy, those types of increases certainly aren’t possible for me given my current position. Moral of the story? Know your market and have realistic expectations about your property.

·      Make Your Own Assessment: Remember those skeptical claims I mentioned earlier? There were two things that personally concerned me the most that I have personally not found to be true.

< p style="margin-left:40px;white-space:pre-wrap;">o   First, was my concern of a higher guest expectation resulting in lower guest reviews. My studios are budget-friendly accommodations. We offer a lot for the price point and the interior has been redone. However, they’re in a 1950s building that in places shows its age. I was concerned guests would book expecting a luxury accommodation based on how Airbnb is marketing the Plus program. However, I have not had this experience at all (knocking on wood as I type). In fact, the Airbnb Plus guests have been really complimentary and I’ve maintained 5-stars for all reservations made post- Airbnb Plus.

o   Second, was losing total control of my listing. While I don’t like that I cannot add photos that are needed (like the pool and sofa bed I mentioned), I still have control over my summary and title.  You also still control your booking settings, house rules, etc.  The biggest difference is that you do not get nearly as much space for verbiage. That can prove quite challenging but has also been a good exercise in prioritization for me.

Overall, I am pleased thus far and with the promotion behind Airbnb Plus, the added exposure is worth it for me right now. That said, as I continue on my journey to diversification of booking sources, it may be something to reconsider down the road.

You’ve heard my experience and seen my stats. Now, I’d love to hear yours. Feel free to share in the comments! 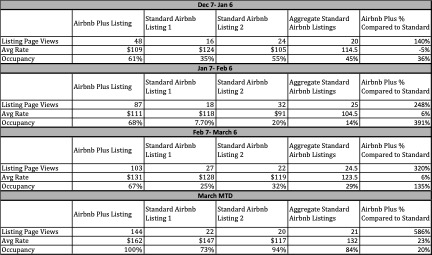 StayFi is a system I have been utilizing in my own rentals for just about a year now to help grow my email database. In

What You CAN Do: The Host Survival Guide to Social Distancing Almost every person on earth has experienced some impact from the Corona virus (COVID-19)

Taking Care of Myself & My Home (during COVID-19)

As I mentioned in my earlier post, even before the Corona virus (COVID-19) took hold of our world, this has been a pretty rough year

Coping in the Age of Corona

Typically, I am the kind of person you want around in a crisis/ urgent/ emergent situation because I’ve always been able to act quickly and